You are here:
March 1, 2018Leave a commentUncategorizedBy jan 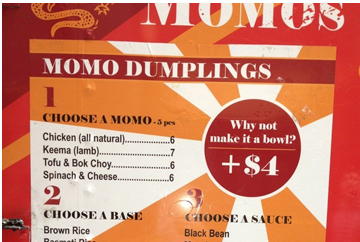 If you already own a restaurant you may also be considering adding a food truck to your holdings. There are a number of reasons to expand to have a food truck, including expanded exposure and different food offerings. So, what are some great restaurants that have expanded to include a food truck?  >>

The Boston-based restaurant owners of Momos and Buns have found that having a food truck is a great way to get customer feedback. Instead of being locked into a menu, they can change it up day to day. In addition, since many people will eat within the vicinity of the truck, they give great feedback on the food, the menu, and the presentation. In a traditional restaurant you don’t get nearly the feedback you do in a food truck.

The variety of Chinese food at this food truck is not as large as the variety in the restaurant, but those who visit the truck don’t seem to mind. They are able to get delicious food, and know that if they want more, they have somewhere to go. In New York there are a number of food trucks. However, there are only a few that started as restaurants and then spawned a truck. Crisp is a mini falafel chain in New York City. The truck serves a variety of food options including tea, hummus bowls, and sandwiches. With the lower overhead cost of a food truck, the restaurant is able to try out new food options that may later make it into the restaurant as a permanent part of the menu.

A gastropub in Jacksonville, Florida has made the transition from brick and mortar restaurant to restaurant and food truck. The truck itself only operates a few days a week, but this is enough to help bring in extra money for the restaurant. Since the truck is in the Riverside section of the city, they are able to get different customers than would normally come into their restaurant, and offer a new way to look at food for those who already love them.

The advertising on the truck is helpful to the business as well, as it drives through the town, and is parked for hours at a time in the same spot. Those who have never heard of the gastropub are more likely to visit after seeing or visiting the food truck.

4. Spencer on the Go

In the Bay Area, you may have heard of the restaurant Chez Spencer. However, you may not have known that they also have a food truck called Spencer on the Go. This truck offers a variety of food options, some from the restaurant, and some new delicacies.

There are many food trucks that then grow into restaurants, however, there are also a number of restaurants that expand to include food trucks. When looking for a great way to get your company more business, consider a mobile kitchen or food truck from Russell Concession & Mobile Kitchens,  With excellent advertising, lower overhead, and a larger population to feed, a food truck is a great way to expand any type of restaurant.